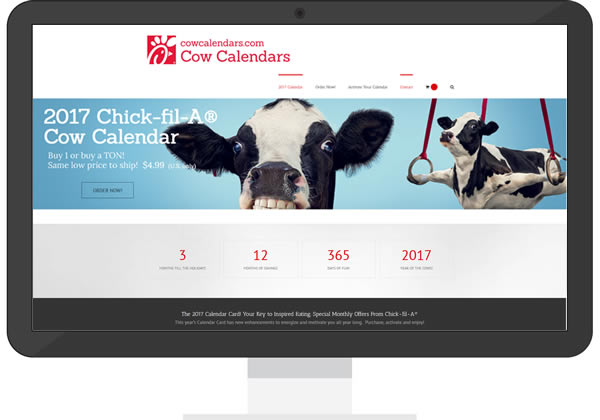 In 1998, the Chick-fil-A Cow Calendar was born. In fact, the cow calendars are one of the most popular calendars on walls across America today!

The opportunity for Chick-fil-A of Canton, was distribution in 2016.  How could their stores make their allotment of cow calendars available to the most customers possible?

The answer was obvious …. an e-commerce website.  Sisson Media worked with Chick-fil-A to quickly bring the concept online and sales began immediately all over the country (and a few outside of the country too – New Zealand!?)  through www.cowcalendars.com.

The site is clean, mobile friendly, and allows customers to purchase the 2017 cow calendar easily…all online.

UPDATE ON THIS PROJECT:  In early November, after a phenomenal run online with traffic and sales building daily, the local operator of this site was asked to take the website offline by Chick-fil-A corporate. CowCalendar.com’s unexpected success was not something that had been predicted or planned and it was tough to find fairness competing with other local stores. The project itself was a huge success and the site owner won awards for the volume of calendars he sold!

Below, is a screen shot from Google Analytics AFTER the site was taken down.  We left tracking code on the blank white page to measure activity after November 4th, 2016.  As you can see, there were over 39k sessions registered and 85% were NEW visitors….unreal.  Traffic actually continued to spike to just under 1,500 visitors per day by the end of November before gradually tapering down to January’s average (yes, two months after shutting down) of 50-60 visitors per day. 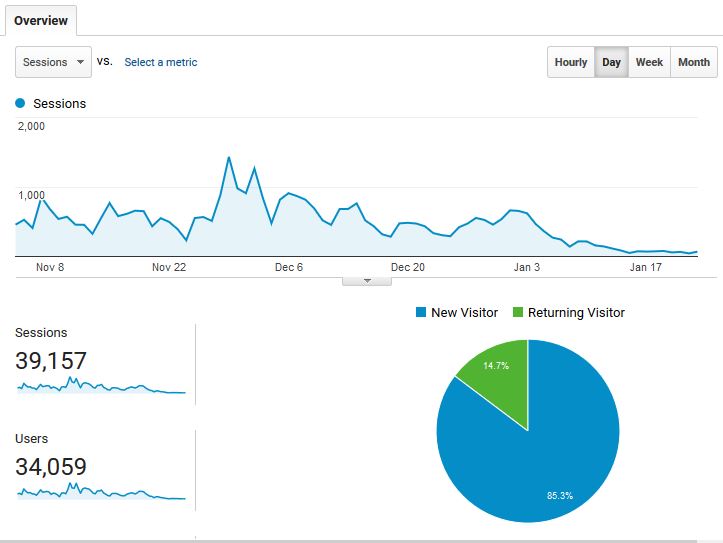 Sisson Media is a huge asset. They enable Cover Ups to make sound decisions involving our internet marketing and give recommendations on website development. Very professional and knowledgeable.

We consider Sisson Media one of our most reliable vendors. They are easy to work with, and they always produce consistent, high quality results.

Scott has consistently provided superlative work in a very expedient manner, not only in the design and implementation of the web site, but also in making sure that my site can be easily found on all major search engines.

The service has been fantastic and our revenue growth has been well over 200% in our second year and expected to double that in our third year… We have been impressed with their ability to meet our needs and consistently deliver superior quality with the professionalism and record results… We are huge fans of the Sisson team!